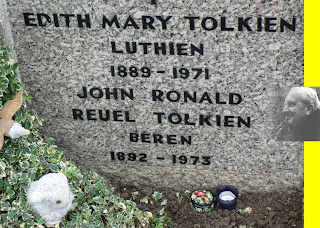 By Catholic, (I am not using the term as modern theologians do), as sort of a horizontal “we are the world” theology in which all cultural truths end up in a tasteless — and useless — stew. JRR Tolkien was a Catholic who had traditional Catholicism, the Catholicism of altars, feasts, fasts, heroic suffering, rituals, saints, miracles, doctrines, and mysteries, in his very bones. The Trinity and the Mass are as familiar to him as his garden or his beloved Beowulf; nay, more, because these Catholic things, as he saw it, are parts of the one true myth, expressed in the Apostles and Nicene Creeds. Real Catholics (and most other Christians) believe in this story as the foundation of their souls. Tolkien breathed it. He was a frequent Mass-goer who rarely received the Eucharist without first confessing. But he was an English Catholic, and like Evelyn Waugh, he early learned in life that as a Catholic he was something less than a Jew in England, despised and distrusted. He suspected one of his best friends, C.S. Lewis, of being a covert anti-Catholic, a reasonable suspicion based on Lewis’s shameful treatment of the South African poet Roy Campbell. And, he wrote to his son, “Hatred of our church is after all the real only final foundation of the C[hurch] of E[ngland].” As an English Catholic, he knew that he saw the world in a secret, fundamentally different way, and he withdrew into the making of myth — a huge myth that by the very circumstance of its origin, could never fail to echo the Catholic myth
Posted by Wanderer at 18:42